This week’s mix is as eclectic as ever, but jam-packed with elegant pieces guaranteed to stand the test of time. For the chronograph crowd, there’s not one, but three, including a Tudor Monte Carlo Home Plate, a Universal Genève Compax, and the nicest gold Breitling Chronomat that you ever did see. And as always, we’re keeping things interesting with a few picks from left field, like a Ref. 4643 Super Precision from Rolex, and a small, Favre-Leuba dive watch for the female market. 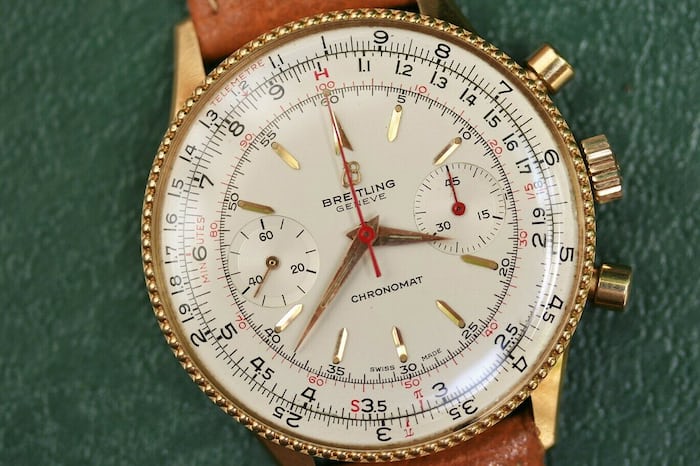 My horological fascination is rooted in the fact that something made up of so many finely crafted mechanical components is also capable of being hidden beneath a cuff, while serving a decently useful purpose in day-to-day life. Fuel was definitely added to the figurative fire upon learning of intricately executed complications, but over time, an appreciation for simpler routes to additional functionality developed. While it might not have involved a demanding, mechanical development, Breitling’s Chronomat came into renown thanks to its patent-protected, slide-rule bezel. With top-quality examples becoming increasingly sought after with the passing of each year, it’s safe to say that affording the capabilities of a combination chronograph and computer made some serious waves back in 1942. 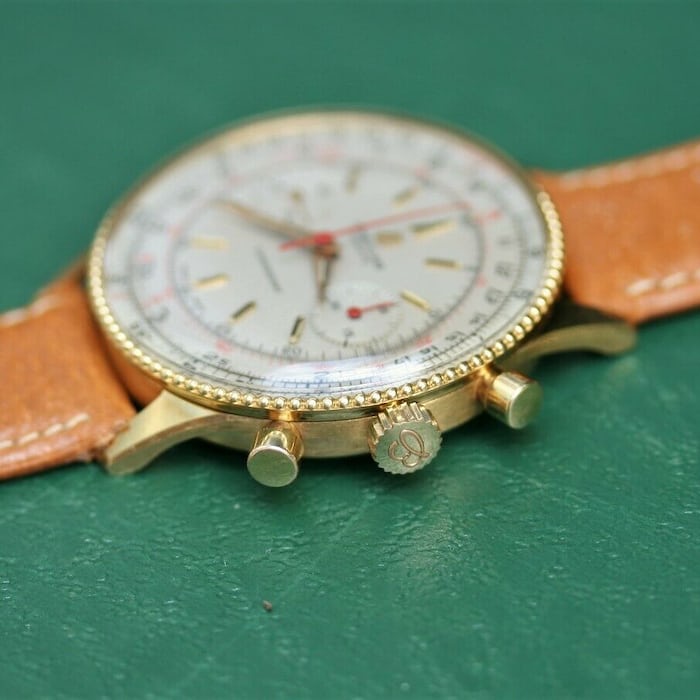 After first becoming available for purchase in the aforementioned year, the Chronomat enjoyed a relatively long production run comprised of multiple references. The Ref. 808 entered the picture in 1959, modernizing the comparatively antiquated Ref. 769, but it’s still instantly recognizable as a Chronomat thanks to that unmistakable slide-rule bezel. As evidenced by the presence of both an arrow-style marker at the 12 o’clock position and a “beaded” bezel, this particular example dates back to the second wave of Ref. 808 production in 1966, and what an attractive example it is in 18k yellow gold. 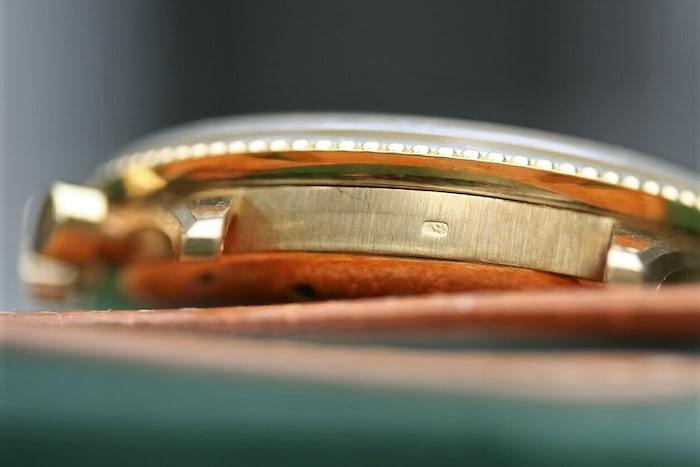 The way the design of the bezel, chamfered lugs, and rounded pushers interact is nothing short of genius on this watch, which is why it’s such a treat to see one preserved so incredibly well. Every last line on the case remains sharp, along with every hallmark and engraving – still boldly visible. The same sort of cleanliness can be seen on the dial, which is essentially free of any flaws. I’ve seen a few pretty much perfect Chronomats in my day, but never one of this series cased in yellow gold, and I must say, it’s got me thinking. 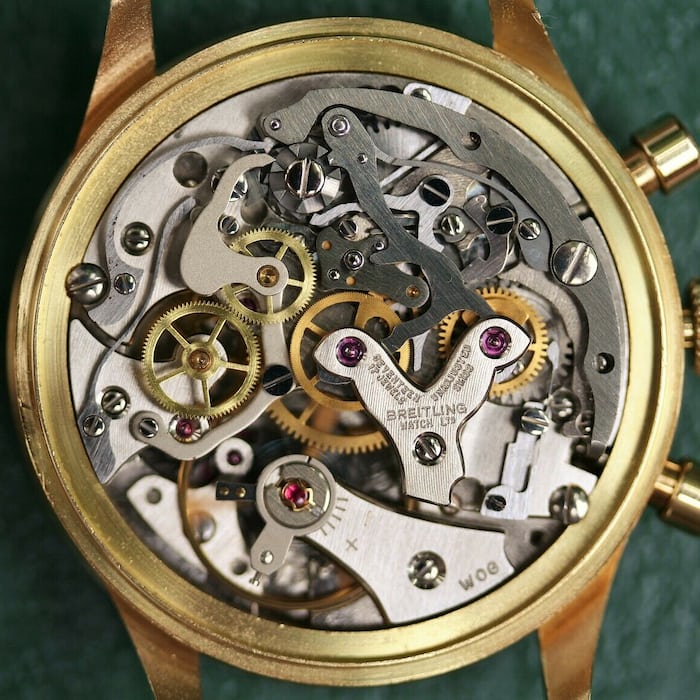 An eBay seller based out of Bethesda, Maryland, has this Breitling listed for $6,730. Additional photos can be found here. 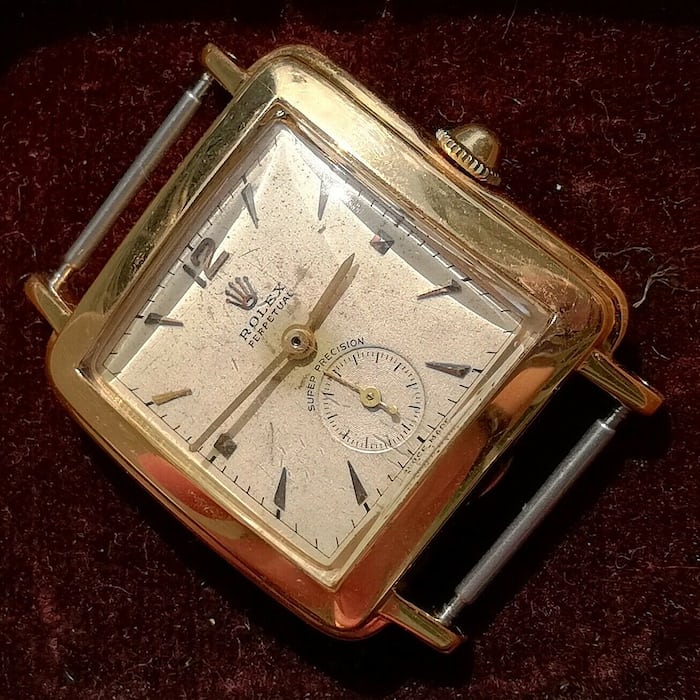 I like a good Daytona or GMT-Master as much as the next guy, but therein lies the issue for some. The way most see it is that these are iconic pieces for a reason, and by wearing one, you’re getting in on the history of something special. For others, exclusivity matters, and as a result, the commonplace fare just won’t do. On several occasions in the past, having that communicated to me broadened my horizons, forcing me to explore what else the brand had to offer. Here’s to hoping this next piece will do the same for you. 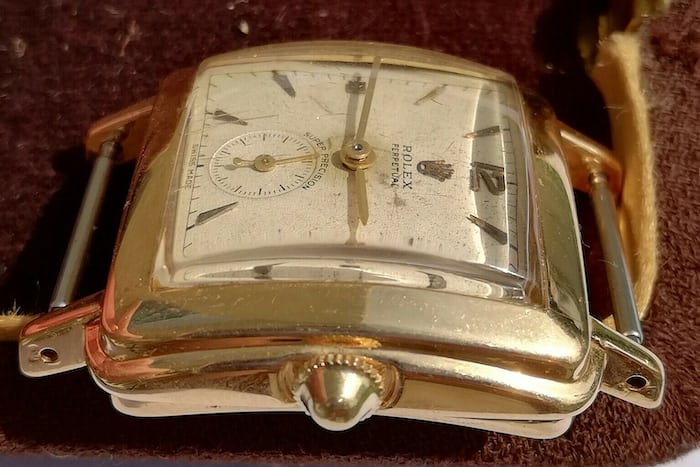 You’re looking at a decidedly different sort of Rolex, which corresponds with the reference number 4643. These emerged during the mid-1940s, which was a somewhat transitional period for the brand, but not in the usual roll-out-the-white-gold-surrounds sense, given that Rolex had yet to establish some of their most impactful collections. Nonetheless, it’s nothing short of a stunning watch with an ornately shaped case that ought to satisfy Rolex-curious contrarians and enthusiasts of the mainstream alike. I’d say it boils down to it simply being a watch you rarely see pop up for sale, and that’s just the sort of thing that gets collectors going. 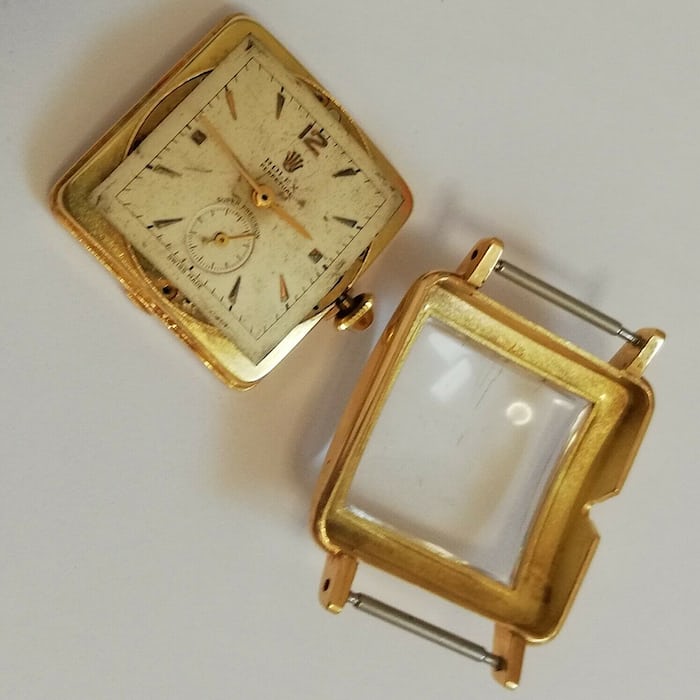 Measuring 28mm across, you’d be forgiven for thinking it would feel diminutive on the wrist, when in fact, the reference wears quite well. Generally speaking, square-shaped watches tend to wear a bit more substantially by virtue of being square, and this one is no exception. Something to note with this example is the condition of its dial, which, although original, is showing signs of its age. The seller offering the watch has included a second, aftermarket dial should you wish to swap, but I’d advise sticking with the one first fitted to maintain the original charm of the watch.

An eBay seller in Singapore is offering this Rolex for $6,500. Hit the link for the full scoop. 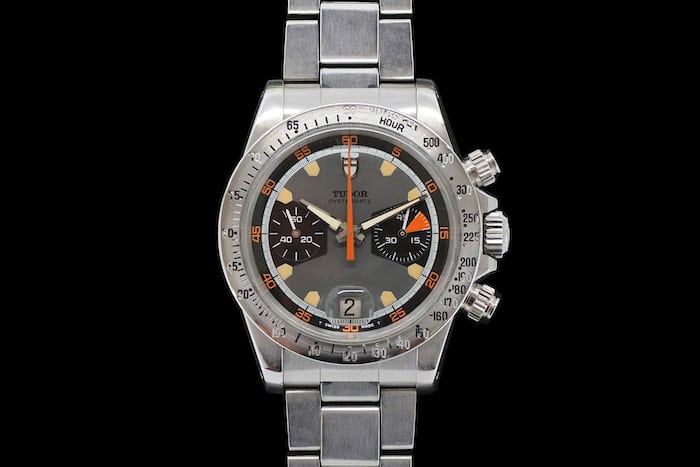 A perhaps more obvious path to take would be to venture in the direction of Tudor if you wanted in on the Wilsdorf scene while maintaining an air of individuality; though, I’d be doing a disservice if I didn’t highlight how that now isn’t entirely the case. That’s because, over the past decade, we’ve seen the market for vintage and neo-vintage watches from the Rolex sister brand grow exponentially, making many once alternative choices now quite conventional and obvious. Despite this, there are a select few relics of the back catalog that still stand out. 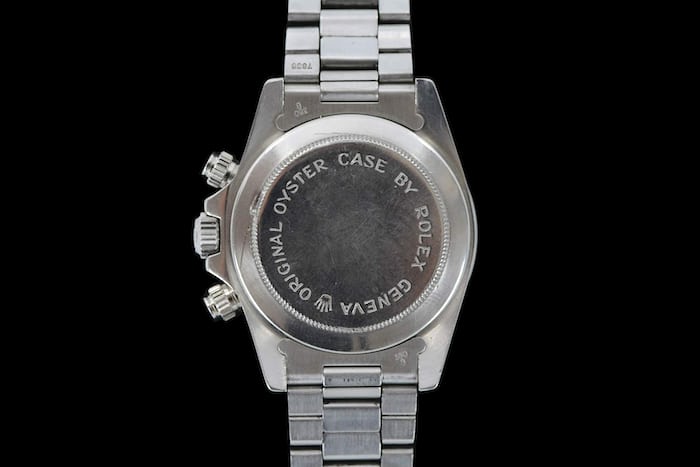 It’s not an early Big Crown, but it’s definitely one of the more notable vintage Tudors that later become synonymous with the brand and its different approach to the hard-wearing tool watch. In this “Monte Carlo”-style configuration, featuring luminous indices reminiscent of baseball’s home plate and a funky, 1970s color scheme, the Tudor chronograph is undoubtedly at its best, which the market would agree with. There’s still an objective difference in the enthusiasm that surrounds the collecting of these as opposed to Daytonas, but interest in them certainly isn’t decreasing any time soon. 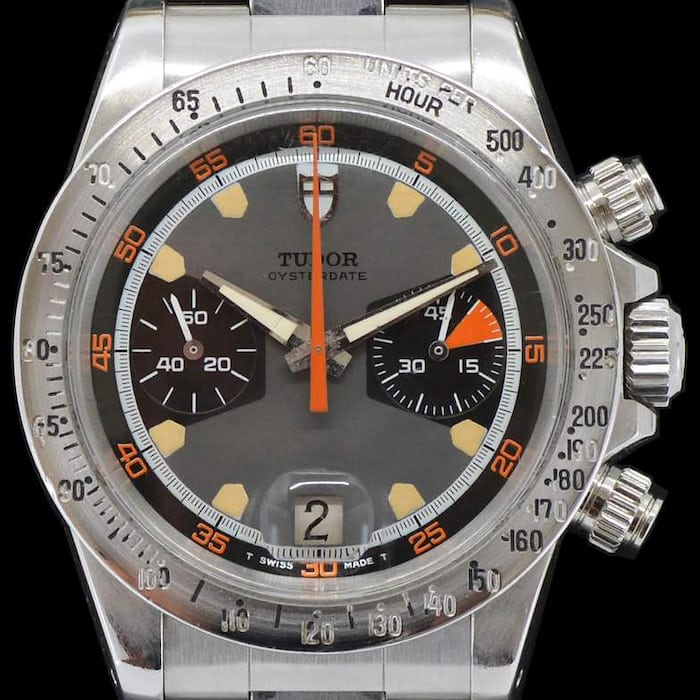 This particular example is likely the nicest one on the market at the moment, and for that reason. If you’ve got a box, this piece checks it with a worn-though-unpolished case, clean dial, and still vibrant applications of orange found on the chronograph hand and outer tracing dial track. In other words, this is more or less what comes to mind upon mention of the reference, which is exactly what you want in an example of a watch like this. According to the seller, it apparently spent the last five years tucked away in a safe, so hopefully, it’ll soon see the light of day on a more regular basis.

The Parisian dealer Harbor Watches has this Tudor listed for sale at €34,900. Do yourself a favor and get a closer look by clicking the link. 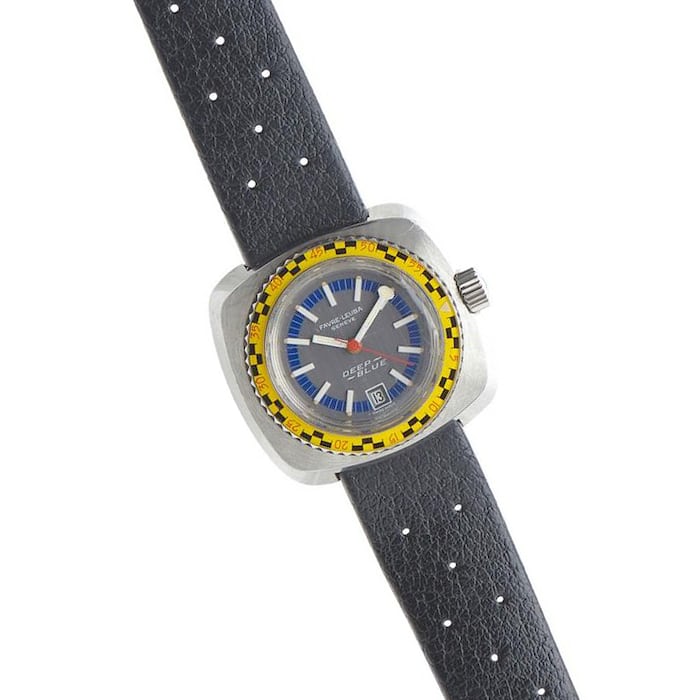 Some of my best finds to date have come from places you’d least expect to find a great watch, but that’s not to say those places were gold mines from the get-go. Most of the time, the discovery of one such watch begins with the discovery of a lesser, though still compelling piece. The move isn’t to get overexcited at first and pull the trigger, but to recognize the value of a good source and regularly keep tabs on their future offerings. That’s what was going through my mind when I came across this piece that’s to be sold by an Australian auction house.

Between all of the lively components that make up this watch, it’s an absolute explosion of color. Ironically, the dial itself is a somewhat subdued grey and blue, but when traced by a red seconds hand and accented with a yellow checkerboard bezel, a louder look is the end result. It’s a fun design that would surely turn some heads on the wrist. Believe it or not, ladies’ variants of popular dive watches were common throughout the 1960s and ’70s, and I’d argue this is easily one of the best. 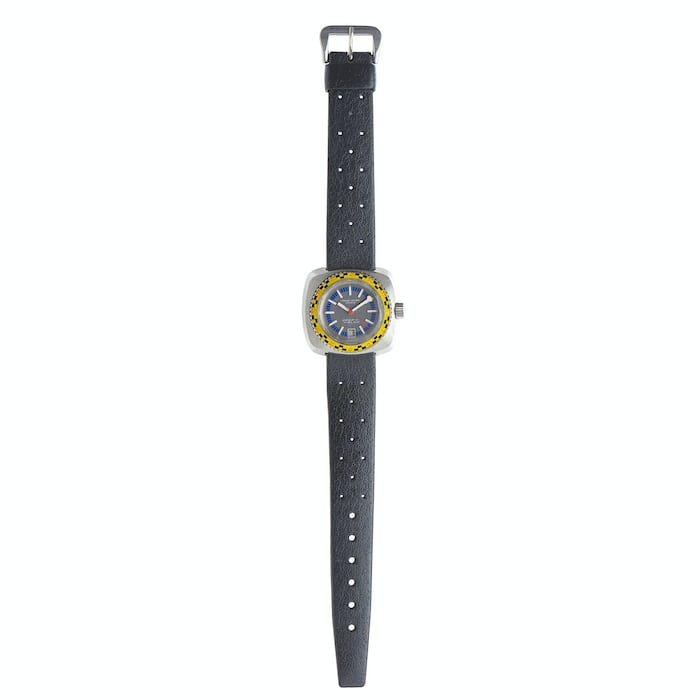 Apart from its excellent condition, which can be seen best upon inspection of its uniquely shaped case and acrylic bezel, this example stands out as a result of the line in the auction house’s lot description that reads “boxed with papers.” While it’s not a game-changer to have an obscure ladies’ dive watch with papers, there’s no denying that their presence would be appreciated. In a time when vibrancy and color are so celebrated within the arena of industrial design, I couldn’t think of a better watch for someone who’s after a bold look.

This scaled-down Deep Blue is going up for sale at Leonard Joel Auctions of Melbourne, Australia, on September 21, when it’ll be offered with an estimate of AUD 1,000-1,500. Click here for further details. 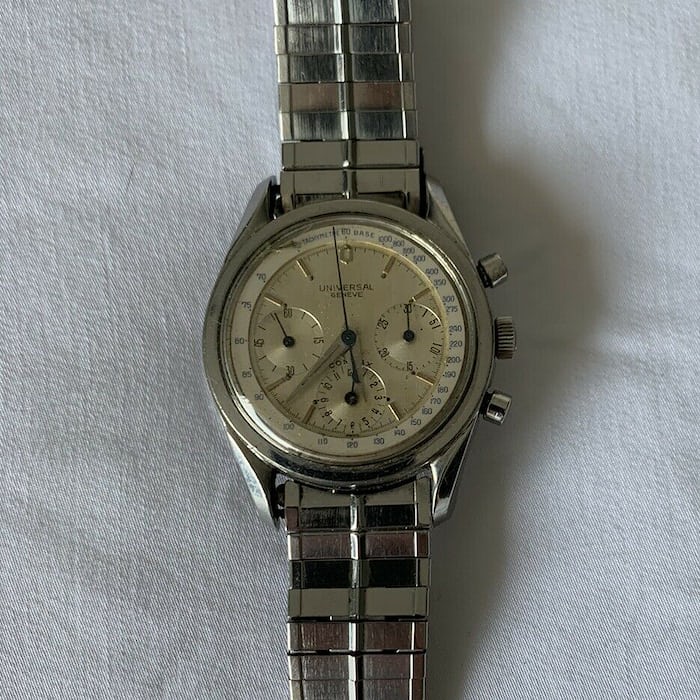 To wrap up the week, we’ve got one last eBay pick, confirming that after a long drought on the bay, the waters are once again rising. It’s a Universal Genève, and a misrepresented one, as contrary to what the seller has stated, this ain’t no Tri-Compax. Instead, it’s one of the loveliest Compax references to have emerged out of the 1960s – and it’s also powered by the most notable sports chronograph caliber of the era. What’s more – it makes for a great opportunity to train your eyes. 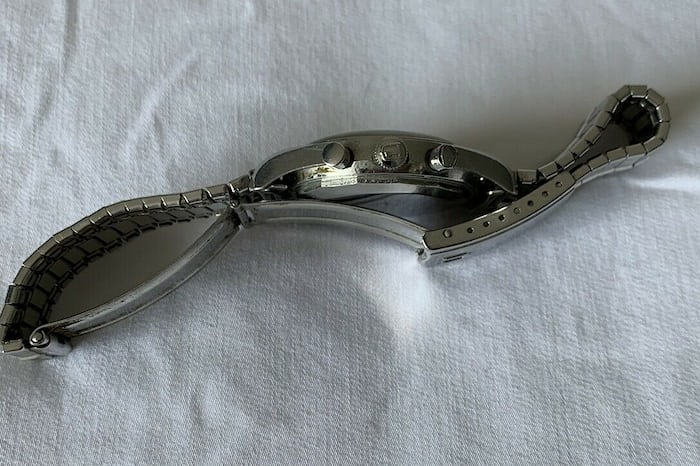 This is another one of those instances where you’ve gotta make do with what you’ve got and not allow less-than-ideal photos to stop you from making lemonade. The dial doesn’t look 100 percent perfect, but there’s one flaw that might not even be one based on my experiences in similar situations. Above the hour marker at 11 o’clock, there’s what you might think is a significant mark on the dial, but I’d lean towards saying it’s an area of the acrylic crystal that was gouged and now has some sort of dirt on its surface. That’s because, in different shots, you can see ever so slightly more of the text below, which wouldn’t be the case if it were truly marked. 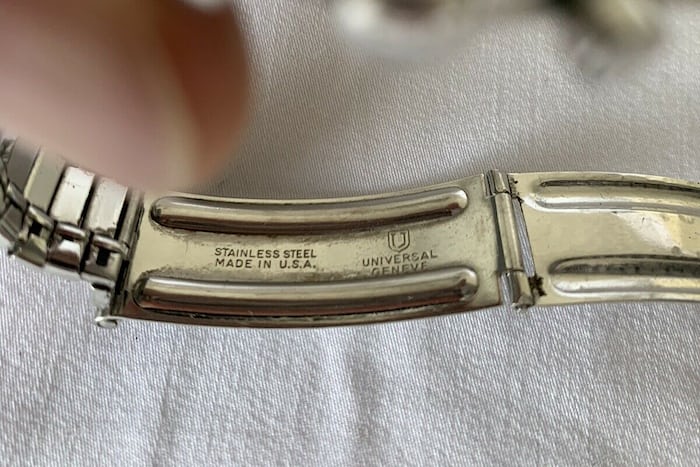 I’m excited by the watch itself, but to be perfectly honest, I’m likely more interested in the ridged bracelet it’s currently fitted to. It’s an American-made J.B. Champion bracelet, but it features a Universal Genève-branded clasp and is similar to the bracelets many Polerouters were originally sold with. If you’ve seen one with minimal wear, you’ll know this one is not that, but knowing the talent that’s out there in the field of bracelet restoration, this could be brought back to its original glory if you wanted. All this to say, it’s a nice addition to an already nice watch, and to have it included is a nice bonus. 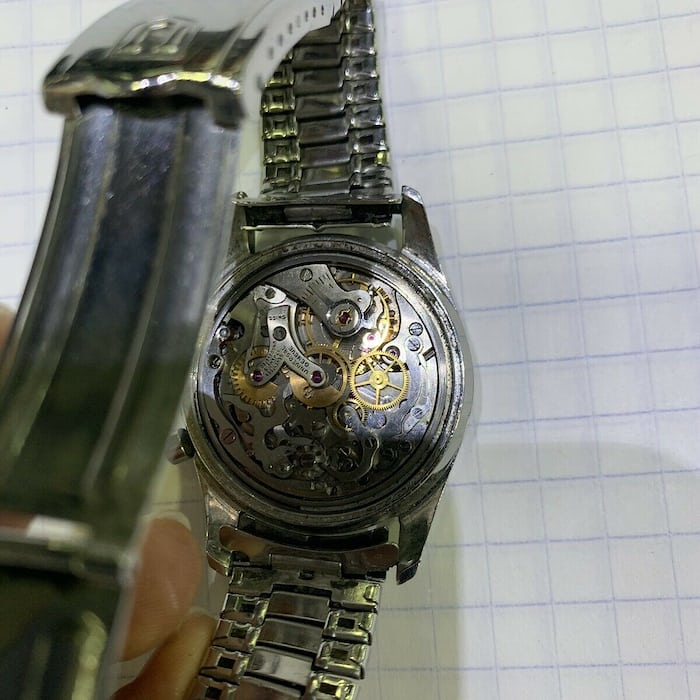 This UG is being offered by a New Yorker on eBay in a sale ending on Saturday of next week. At the time of publishing, the high bid stands at just under $2,150.