The tourbillon nowadays can sometimes seem very divorced from its original purpose, which was to improve accuracy. For most of its history, it was a troublesome mechanism to make. Because of the amount of extra energy it saps from the going train, making tourbillons was something which, after their invention by Breguet at the dawn of the 19th century, few bothered with unless they were obsessed with creating a technical tour de force of some sort, or in exploring the degree to which the tourbillon really could show definite improvements in performance that were actually due to the tourbillon itself, and which were not to some degree – perhaps mostly – due to the great care that had to be taken in making one.

That said, pocket tourbillons often turned in superlative numbers at the observatory time trials, although it was even less clear that they delivered on their theoretical promise in wristwatches. Prior to the post-quartz crisis mechanical renaissance, tourbillon wristwatches were made in vanishingly small numbers, largely as chronometric test-beds (from the likes of Omega and Patek Philippe), but since ticking and tocking began to really pick up again in Switzerland, the tourbillon has increasingly started to seem like a brilliant film actor who for some reason keeps turning in performances in high-budget, mega-salary, but artistically vapid crowd-pleasing blockbusters, rather than staying true to their art. Of course, being a starving artist gets old fast, and there is nothing wrong with tourbillons made to dazzle the eye and delight the mind with their ingenuity, but every once in a while, one yearns for a palate cleanser. Which is where the new flying tourbillon wristwatch from Glashütte Original comes in. 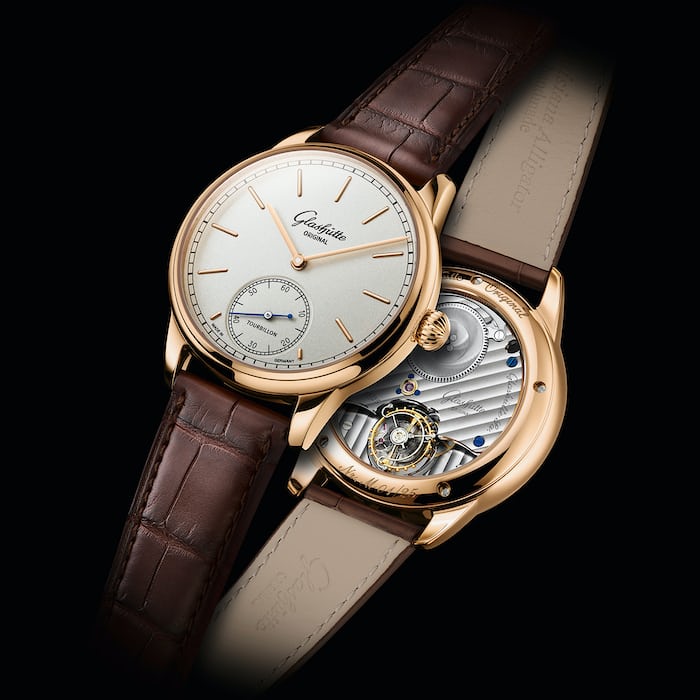 The new Glashütte Original Alfred Helwig Tourbillon 1920 is the tourbillon as most of us manifestly do not remember it, at least not from personal experience of a new tourbillon wristwatch in this our age of the Tourbillon As Three-Ring Circus. It is perhaps most notable for what it does not have – no multi-axis shenanigans; no chains nor yet any fusées; no opening in the dial to allow you to appreciate its gyrations without undergoing the inconvenience of taking your watch off your wrist; it is not skeletonized; it is not a mystery tourbillon, oscillating away with no apparent driving mechanism; it is not dragging along with it a cornucopia of other complications. The Alfred Helwig Tourbillon 1920, in fact, is such a pure example of the tourbillon wristwatch as to almost constitute a rebuke to the last three decades of tourbillon design, including some of the tourbillons produced by Glashütte Original itself. If you did not know for sure that it had been released in the midst of the mind-bendingly chaotic global exercise in Theater Of The Absurd that is 2020, you could in fact easily be convinced that it was produced sometime in the mid-20th century (except for the fact that nobody was making tourbillons in Glashütte in the 1950s – at least, I don’t think anyone was, although I could be wrong – who knows what secret project some frustrated watchmaker might have been tinkering with at home to cleanse his own palate of the taste of collectivized watchmaking) and intended not as a luxury divertimento, but as a serious-as-a-stroke experiment in cutting-edge precision horology. 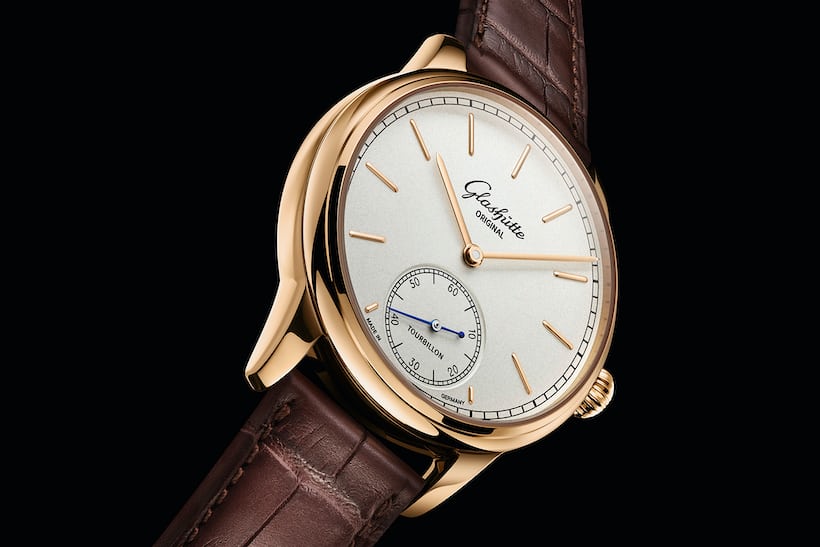 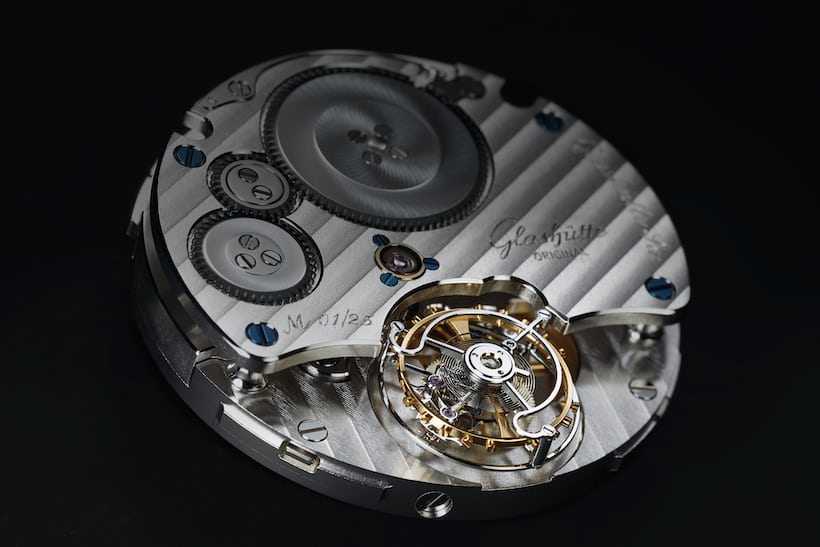 The watch overall is a classicist’s classic. The only hint it is anything other than a very nicely made 40mm x 11.60mm rose-gold wristwatch with small seconds is the legend “tourbillon” on the dial, which is made of silver-plated gold, with a sunken small seconds sub-dial, stick hands, and applied gold markers. As with the observatory pocket and wristwatch tourbillons of yore, the real point of the watch is what’s under the hood.

Now, there may arise the natural question in the minds of some readers, especially those not conversant with some of the finer points of tourbillon construction and history, of who Alfred Helwig was and what is so special about the year 1920 – which, after all, was a pretty big year, giving us everything from the great Spanish Flu pandemic to the Treaty Of Versailles to … well, the list is long. It was also the year in which, after the abdication of King Frederick Augustus III of Saxony two years before, Saxony became the Free State Of Saxony under a new German constitution – and, of course, in Saxony are both the cosmopolitan city of Dresden and, nearby, the little village of Glashütte which was, in defiance of its diminutive size, one of the great centers of watchmaking in Germany. Glashütte was the home of the German Watchmaking School, Glashütte, and one of its brightest lights was Alfred Helwig, professor and technical director, who taught there from 1913 to 1954 and who would train some 800 apprentice watchmakers.

Helwig’s primary interests, unsurprisingly, were precision horology in general and the fine adjustment of watches for precision in particular, but today, he is best remembered as the inventor, in 1920, of the flying tourbillon (fliegende tourbillon). There had been, prior to his invention, at least one known watch, by Robert Benson North, which fits the technical definition of a flying tourbillon but it was Helwig who created, independently as far as I have been able to tell, the version of the flying tourbillon which defines the mechanism today. 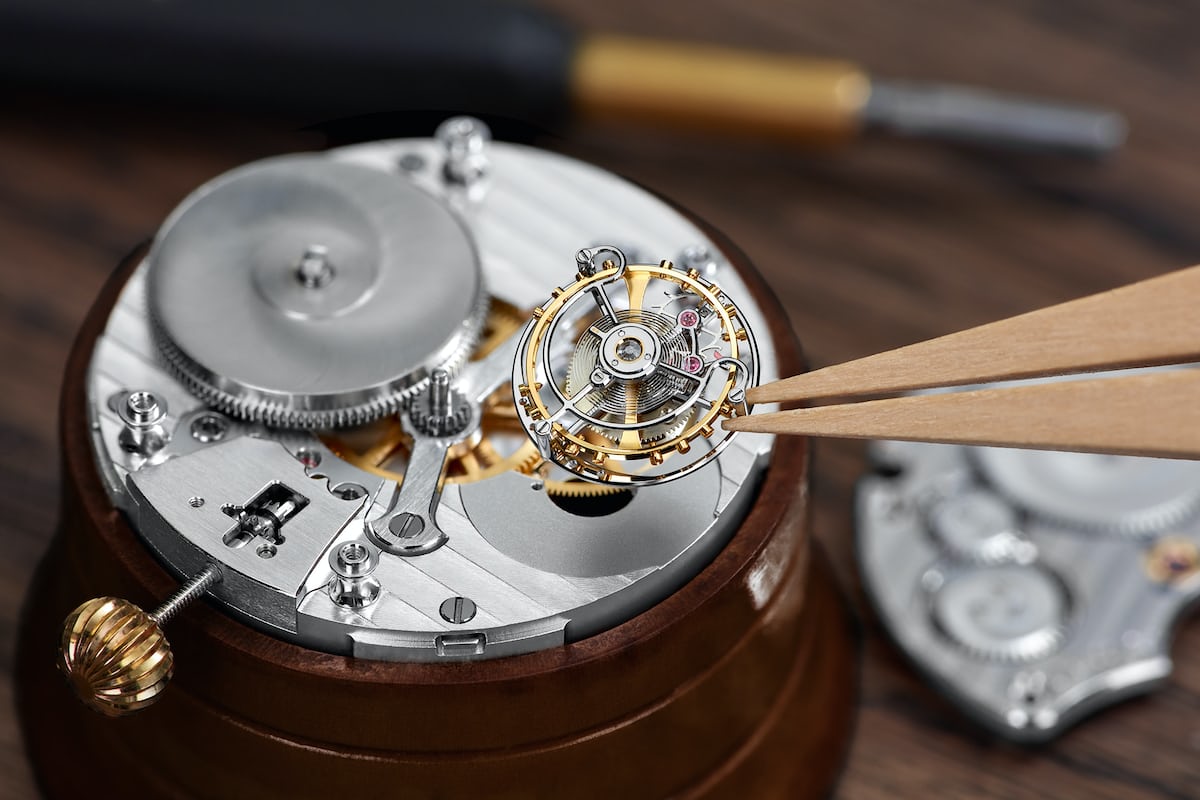 The flying tourbillon carriage of the hand-wound caliber 54-01 in the Alfred Helwig Tourbillon 1920.

The movement for the Alfred Helwig Tourbillon 1920 is the hand-wound caliber 54-01, which is 32mm x 6mm, with a pillar-and-plate construction. It runs at 21,600 vph (a rate common to many modern tourbillons) in 20 jewels, plus two diamond end-stones for the balance. Often, Glashütte Original’s tourbillons have been self-winding, and it’s quite wonderful to see someone producing a high-grade, hand-wound tourbillon movement – call it old-fashioned or reactionary of me, but I have always felt that the tourbillon is most enjoyable taken solo, without so much as an automatic winding system. It simply feels more pure and true to the spirit of the mechanism (to me anyway).

A tourbillon is, as we’ve already mentioned, generally a most fragile mechanism. The tourbillon consists of a rotating cage or platform, within which is the regulating mechanism of the watch – that is, the escape wheel, lever, balance spring, and balance (this is assuming the tourbillon has a lever escapement; a tourbillon can be made with other escapements as well, including the chronometer detent escapement). Breguet’s invention was originally intended to address the issue of varying rates in the vertical positions in a pocket watch; by setting the regulating components rotating in the vertical plane of the watch (when worn upright in a pocket), a single average rate for the vertical positions would be produced. The cage, for maximum stability, is generally supported by the movement plate on one side, and an upper bridge on the other. Helwig’s invention did away with the upper bridge, and the result was not only a tourbillon that could in theory be flatter than the traditional construction, but also afforded an unobstructed view of the cage itself.

Whether or not this specifically was at least in part Helwig’s motivation for creating the flying tourbillon, I don’t know; I suspect the answer may be buried in the pages of the epic and comprehensive Das Tourbillon, by Reinhard Meis. I’m not sure how many flying tourbillon watches Helwig completed – the last time I consulted Das Tourbillon, I found only one, made by Helwig and Conrad Richter in 1920; however, I probably missed something, as a flying tourbillon made by Helwig and his colleague Woldemar Fleck, in 1931, came up for auction at Sotheby’s in 2012. (It appears to be the same watch that appeared in 2004 at Barneby’s – either that or Fleck and Helwig cranked out two of them in the same year, which seems unlikely, to put it mildly). They appear, in any case, to have been extremely rare in the period 1920 to 1960 at least, although the flying tourbillon has become a staple of modern fine watchmaking, where it is often used to achieve a flatter movement than would be possible with the traditional construction. 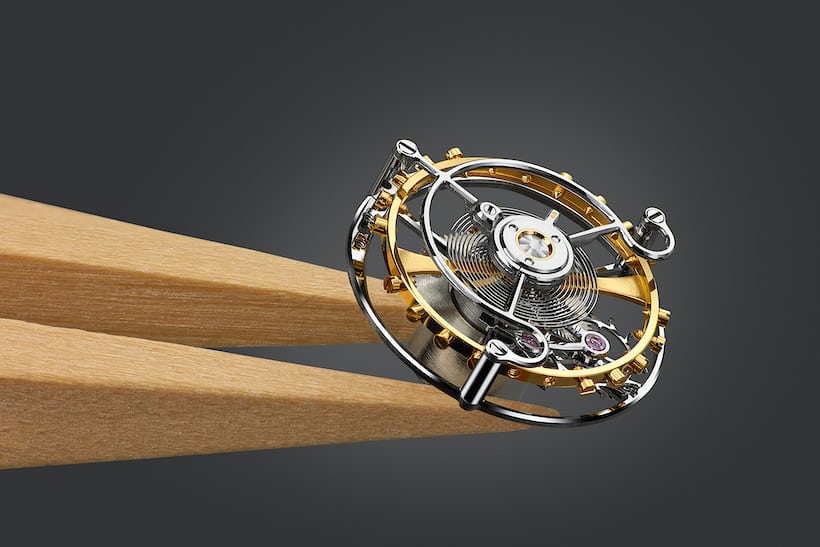 A question which sometimes arises is whether or not a tourbillon can be considered a complication proper. Generally, the term “complication” does not refer to regulating mechanisms such as the tourbillon or remontoire, but rather, to mechanisms which enable the watch to display additional information, such as the perpetual calendar or the Equation of Time. I used to be extremely doctrinaire about this (I’m talking 20-plus years ago when the term “modem burner” was being thrown around for forum posts that had actual, you know, pictures in them), but I have become perhaps less rigid and more philosophical over the years – so much so, in fact, that I felt no qualms about picking a tourbillon, time-only watch as my favorite complicated watch of the year, for which I was roundly and, I have to admit, justly scolded by a couple of readers. 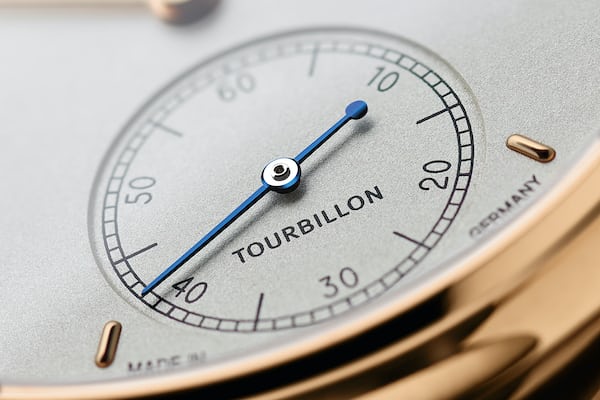 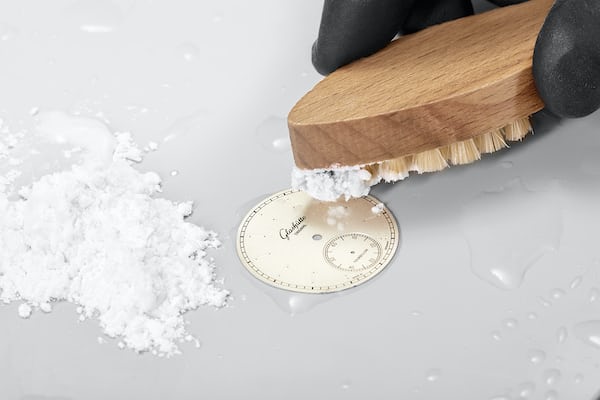 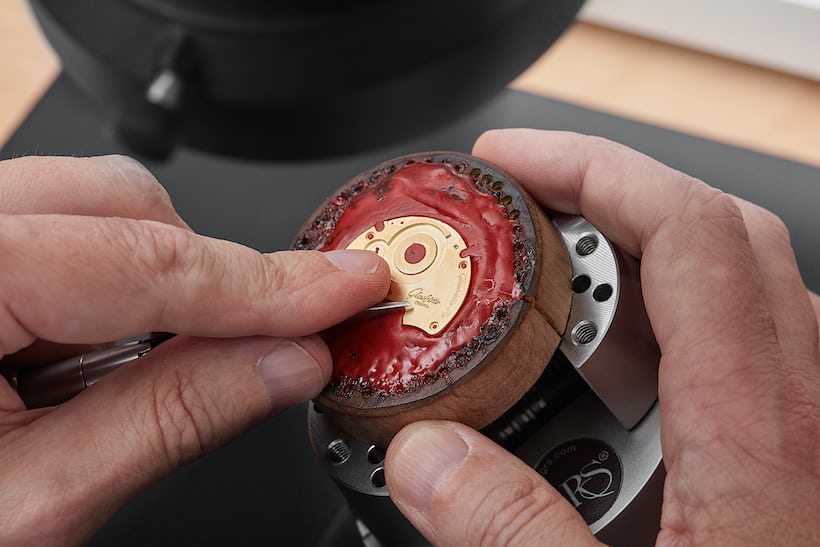 This particular limited edition from Glashütte Original is, in almost every respect, a watch I think Helwig would have been delighted to see in direct lineage from his invention of 1920. It is one of the most dignified watches I have seen in a long, long time – you look at it, and all the committee-designed, marketing-department-driven design and technical decision-making of the last couple of decades seems to fall away, and you return to perhaps a more innocent but also purer time, when minute repeater gongs were still quenched in horse urine and the leisurely pursuit of real excellence was a bit more the stock-in-trade of so-called luxury watches than it sometimes seems to be today. 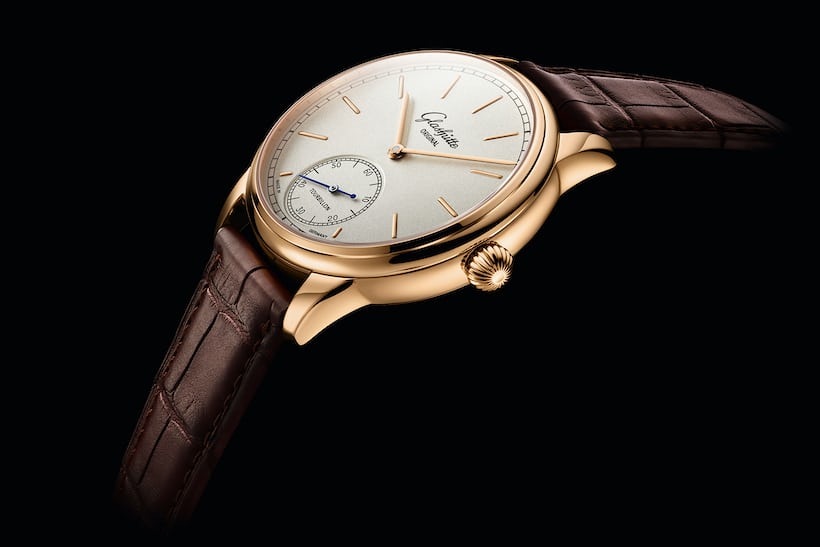 Okay, it is expensive (so what else is new) at $121,800 of your favorite dollars, but for that, you get a watch so immensely self-assured, you almost don’t notice the Unpleasant Matter Of The Bill (almost). It does not signal wealth; rather, it signals that signaling about wealth is really something beneath its dignity, and it ought to be beneath yours too. It breathes the essence of a genteel, refined, and unostentatious lifestyle, redolent of battered vintage Bentleys looking in need of a paint job they will never get; large, rambling country estates going slightly to seed; complaining to your domestic partner of several decades in a reedy, irritated voice that the rabbits have gotten in amongst the cucumbers again; of sitting in sullen silence by the fire on Christmas morning while the relatives revel until you get everyone’s attention, at about one or so, by shouting that the damned dog isn’t going to walk itself. Laugh if you will, a man can dream. The only downer to me about the whole business is that this lovely, lovely watch, which finds pandering to transient tastes of any kind unworthy and irrelevant, is a limited edition. Something like this, I feel, ought to be made on a regular basis – if nothing else, to keep hands and eyes and minds sharp, and to remind the company, as much as its customers, where its philosophical, technical, and artistic centers of gravity really lie. Still, I had far rather have it as a limited edition than not have it at all.