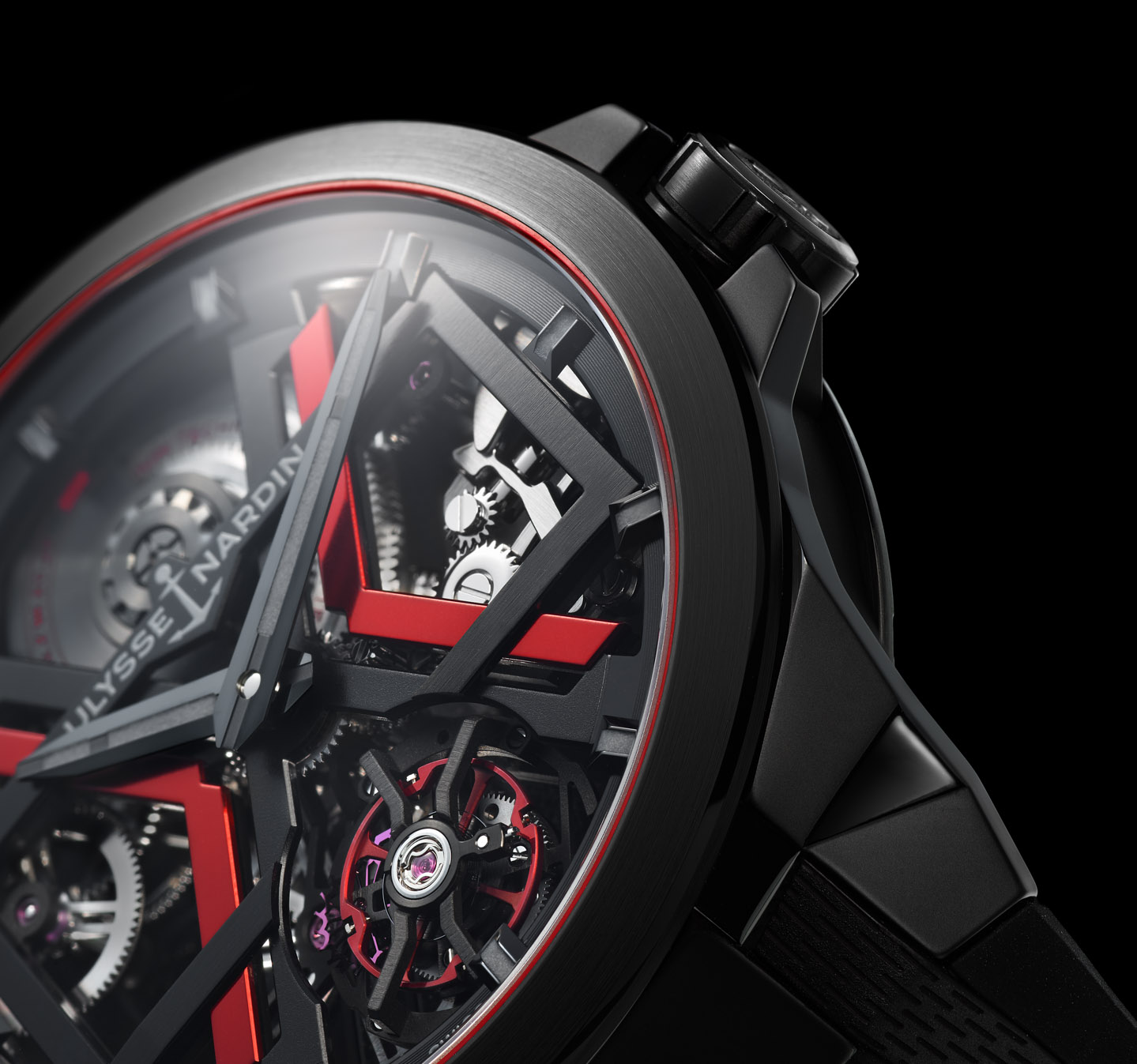 For 2020, Swiss Ulysse Nardin introduces a new selection of sporty, comparably affordable, and practical tourbillon-based watches with the Ulysse Nardin Blast family of timepieces. There is a friendly irony to the explosive-themed watches, as they are positioned as items to be worn by explorers and bombasts of all types — despite the fact that their inner mechanical workings are, historically, relatively delicate. Alas, the tourbillon was never meant to be jostled around, per se. I know, Richard Mille’s strategy of outfitting celebrities such as Rafael Nadal has put a bit of a wrench in this traditional perspective on the high-complication, but it remains to be seen how many real-world watch lovers want to go out and get their tourbillon-based luxury watches dirty. The brand claims that while the Blast is not a diver’s watch, it is lightweight with a durable movement that is meant to be worn on the wrist while its wearer is engaged in an active lifestyle. Accordingly, the muscular stance of these new models with their fresh movements does inspire one to go out and revel in adventure. Blast off with a Blast and see where the day may take you…

The 2020 Ulysse Nardin Blast collection is brand new, and the trained eye can appreciate how these are an evolution of existing models. The 45mm-wide case and movement began life as the last-generation Ulysse Nardin Executive Tourbillon watches. The cases have been redesigned, and the movements have been thoroughly amended. It is certainly the case that the Blast has more curb appeal in 2020 than the Executive Tourbillon that never quite sat firmly as either a dress watch or a sports watch. 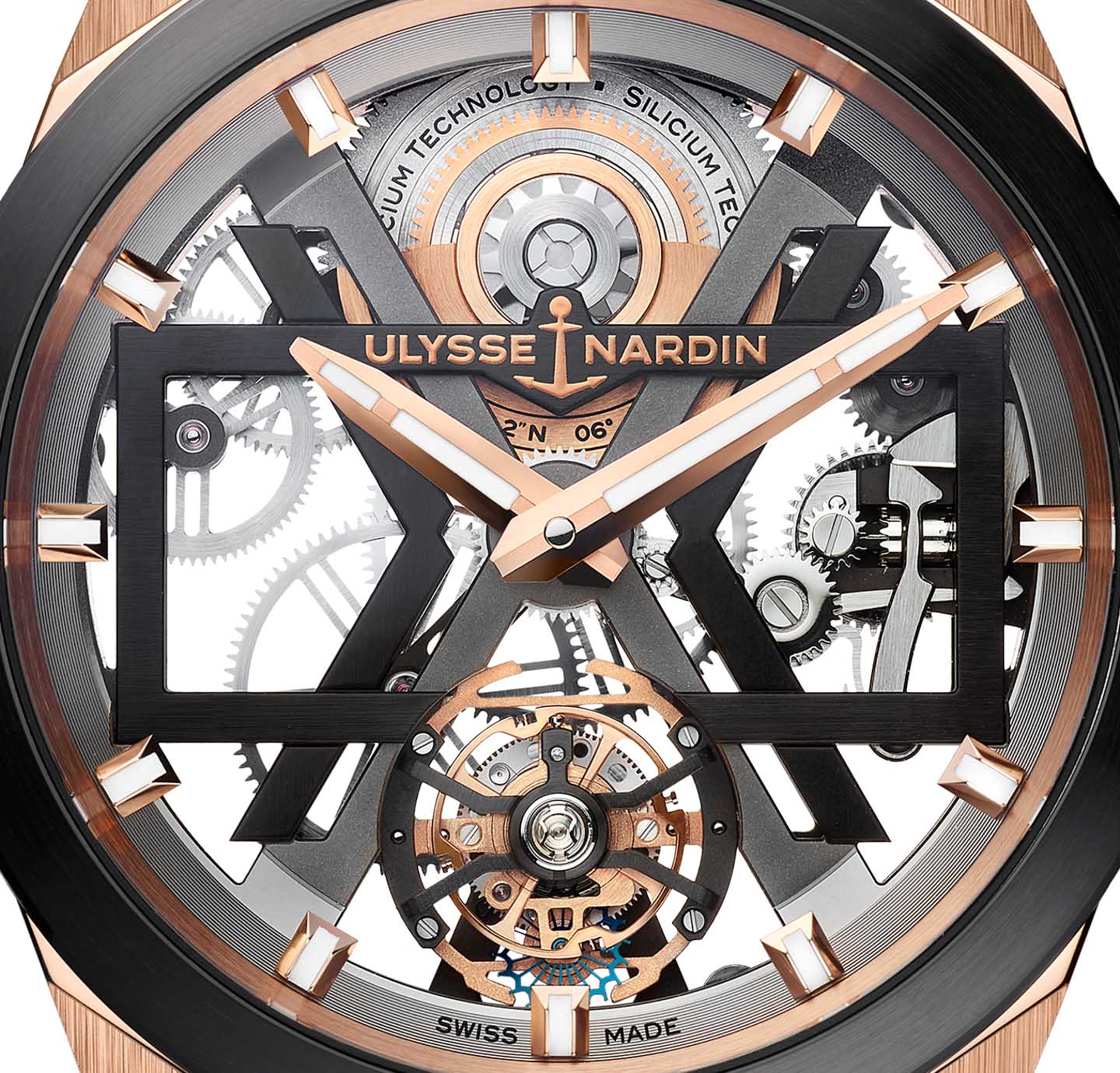 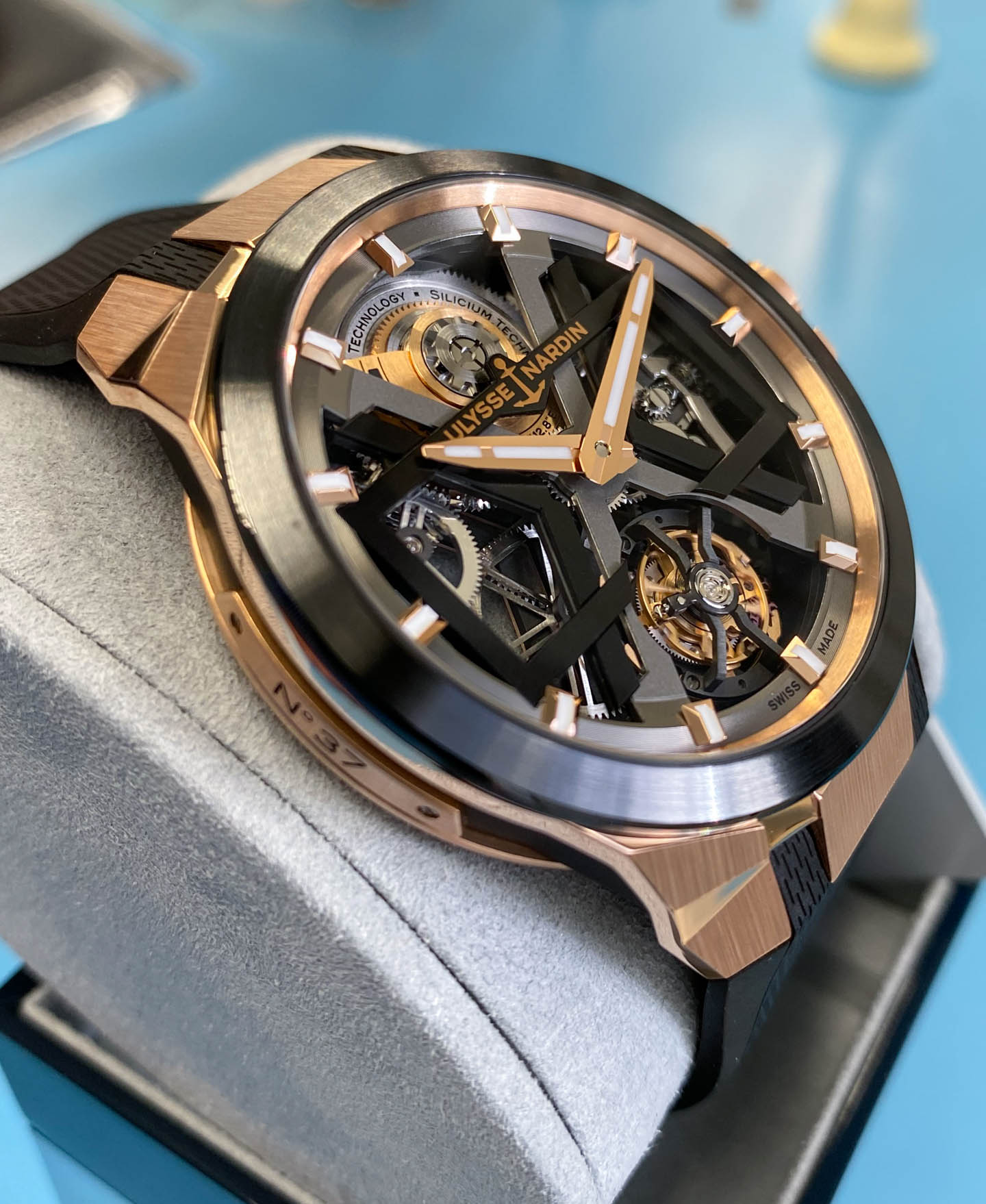 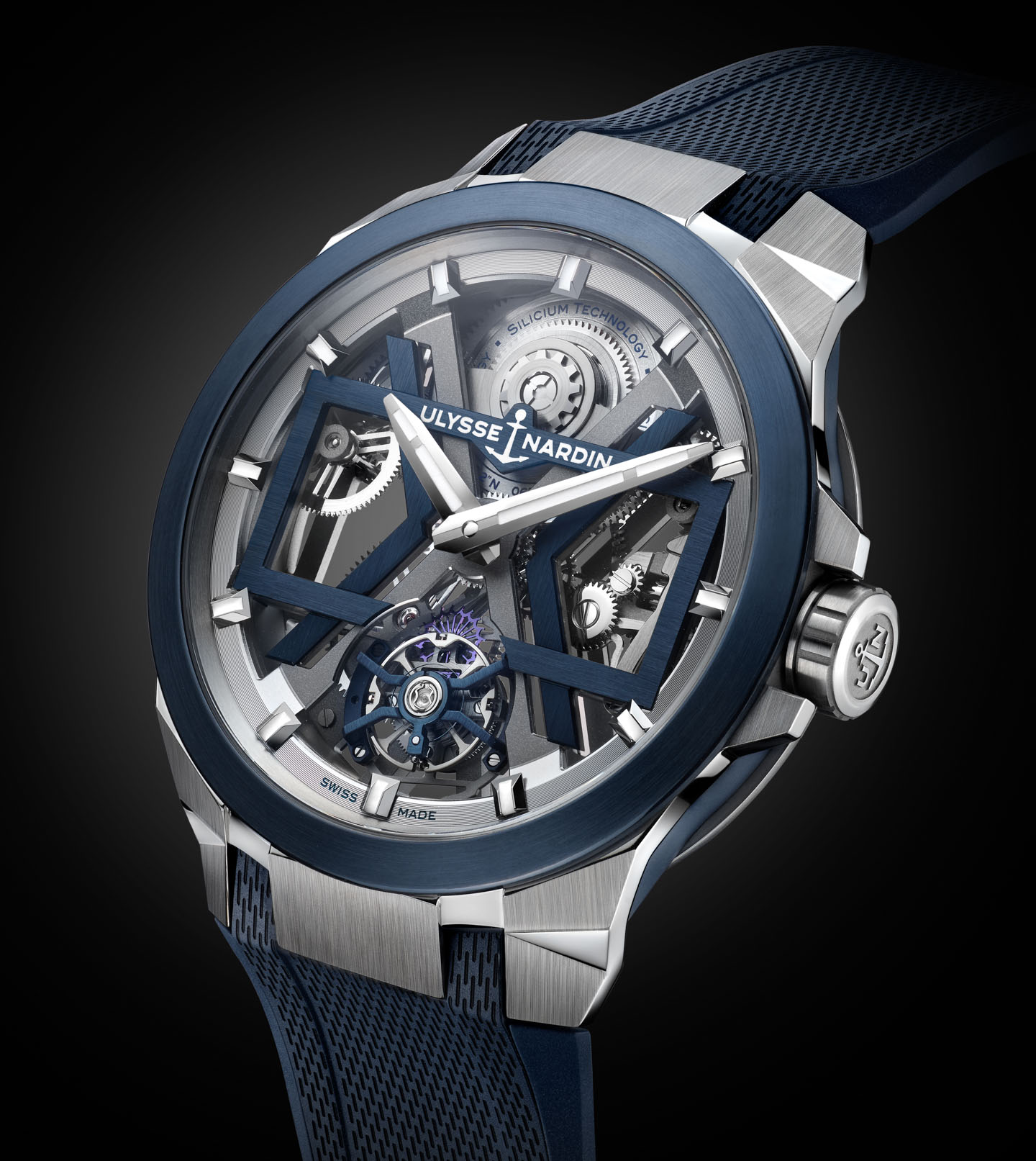 Let’s focus on the new Blast watch’s attention-grabbing movement, which is the in-house-developed and -produced Ulysse Nardin caliber UN-172. Ulysse Nardin remarks that this new mechanism is an evolution on the UN-171 movement, which is among the many tourbillon-based mechanisms developed by the Le Locle-based company. In addition to the new entirely new (and highly elaborate) bridges and “X” design theme, the movement includes a micro-platinum rotor-based automatic winding system over the mainspring barrel, visible through the dial-side of the watch. Geo-coordinates on the watch identify the location of Le Locle, Switzerland on the globe. The UN-172 movements feature Ulysse Nardin’s in-house silicon technology, with silicon being used to produce the mechanical movement’s escapement wheel, anchor, and balance spring. These are not Diamonsil-coated parts, which is another in-house silicon technology featured in some other UN products.

The movement itself operates at 2.5Hz (18,000 bph) with a power reserve of about 72 hours. Ulysse Nardin further remarks on the incredible winding efficiency of the movement, both in automatic or manually-winding modes. The movement is produced from an efficient 137 parts and is also anti-magnetic to NIHS standards. Blast watches each come with a “Ulysse Nardin (UN) Certificate” which exceeds COSC Chronometer standards. Like a few other companies, including Rolex, Patek Philippe, and Omega, Ulysse Nardin performs its own in-house testing on each movement, notably after it has been cased in the watch. These tests put cased watches (with the movement in the case as opposed to testing the movement outside of the case as COSC does) through a long battery of situations, including various positions and under various temperatures. The point is to make sure the movements are accurate and perform consistently. 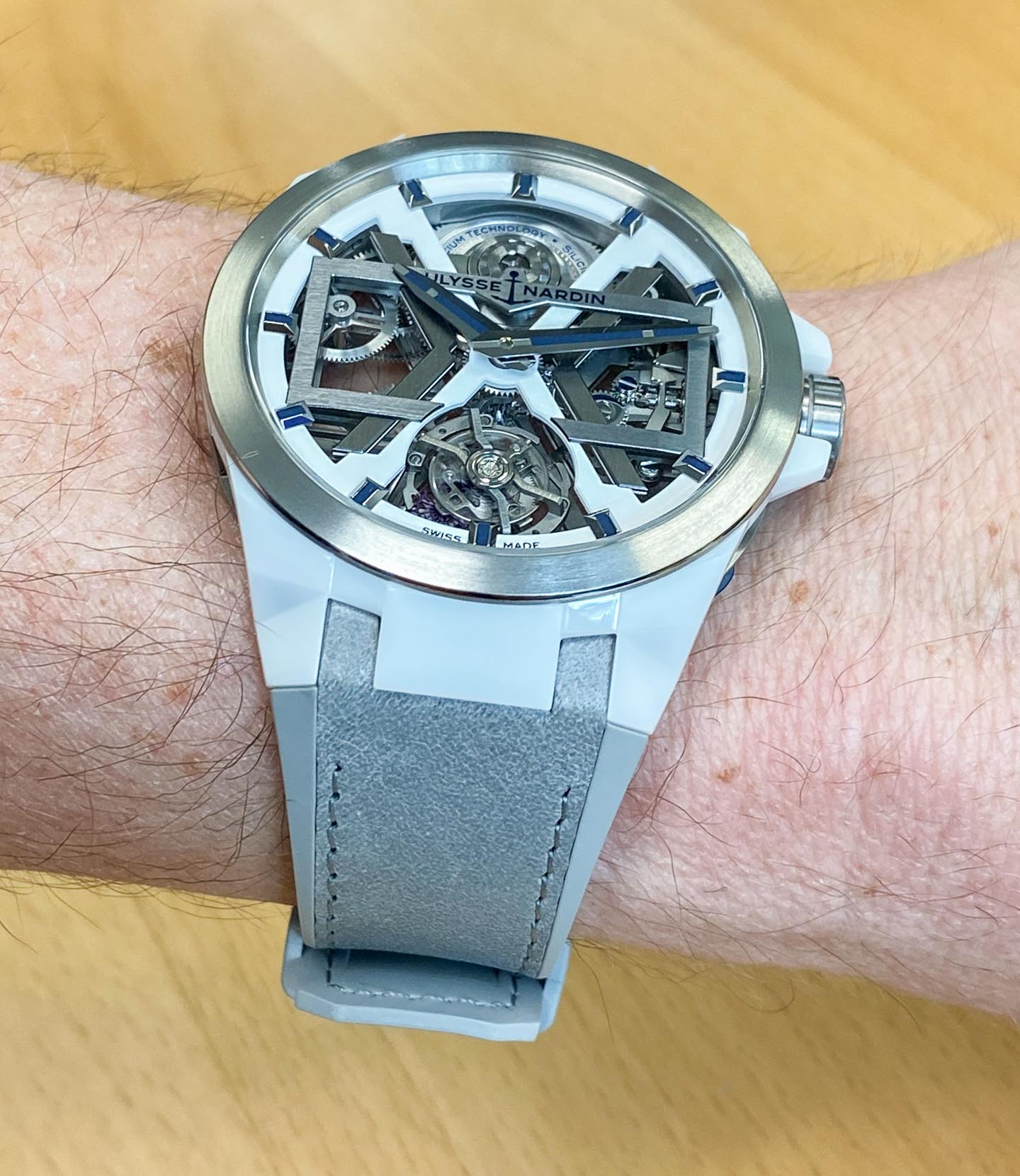 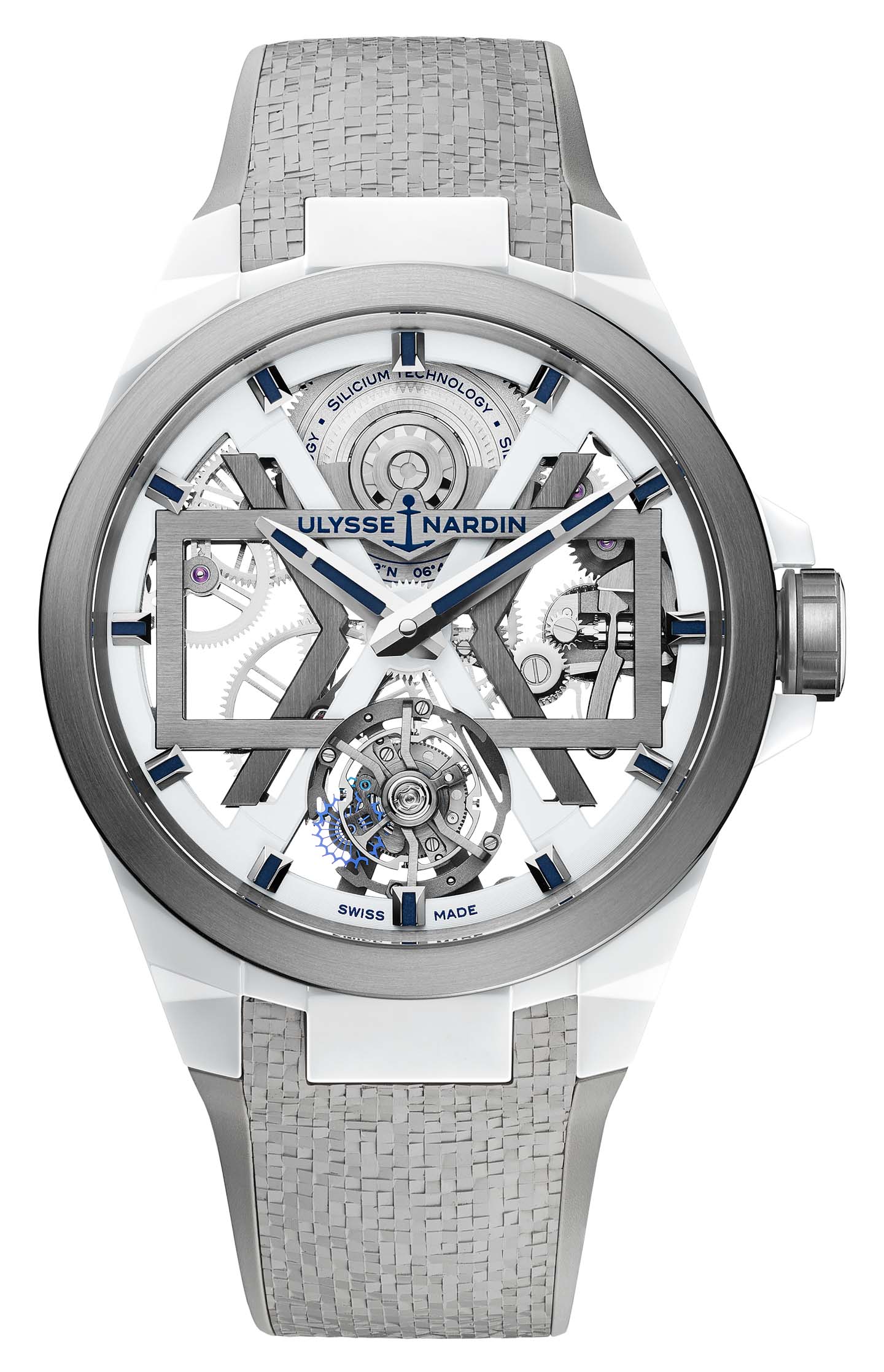 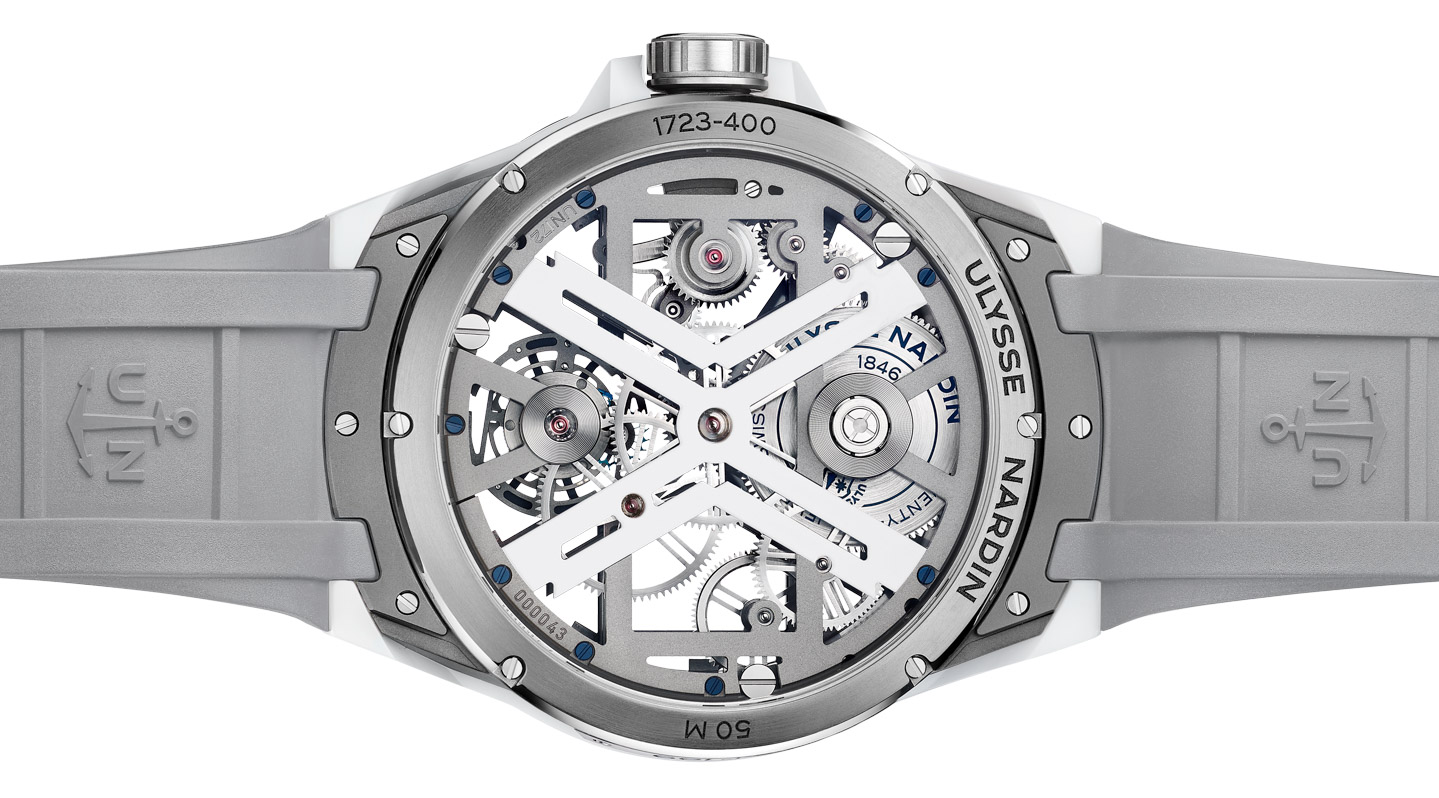 The UN-172 movement seems like a winner because it combines the practicality of automatic winding and silicon parts with the expansive beauty of a haute horology mechanism complete with the visual splendor of the skeletonized dial and movement. Ulysse Nardin introduces the Blast with four models, each with a different color theme and using slightly different materials. The 45mm-wide cases are water-resistant to 50 meters and come on a series of specially fitted rubber straps with inlay materials ranging from fabric to alligator.

Speaking of the straps, Ulysse Nardin appears to be particularly keen on its new “self-deploying buckle.” This new buckle technology (co-developed with a partner in Switzerland) is first available on the Blast watches. The idea is pretty simple and is really about making the closing (and opening) of a butterfly-style clasp a bit more elegant. Ulysse Nardin demonstrated the action of the buckles for me via video, but I look forward to trying them on myself. Overall I believe this new deployant will be a welcome new feature. 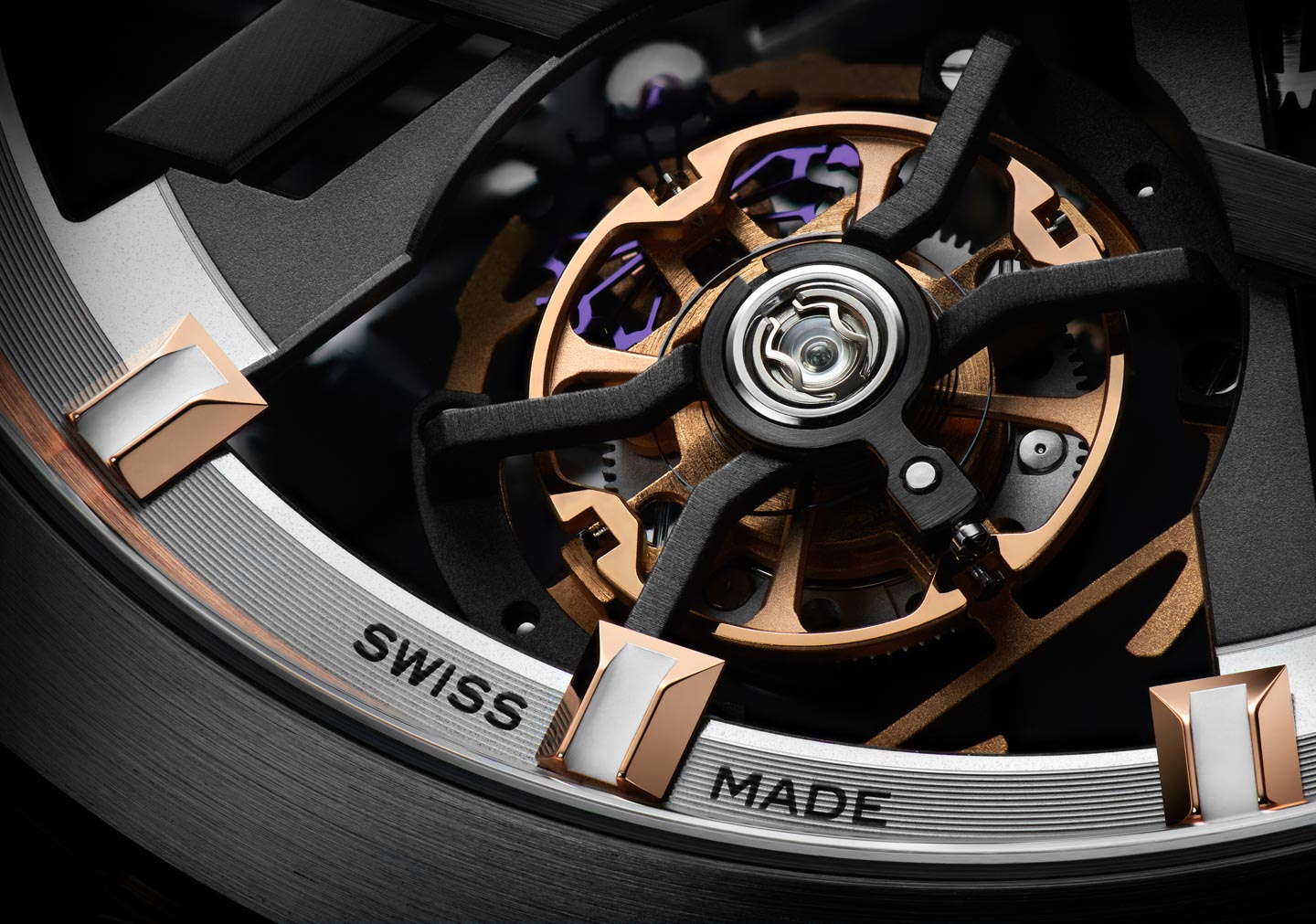 I am also interested in the angular case design of the Blast, which seems to evoke watches such as the Audemars Piguet Royal Oak Offshore, as well as the Waltham Aeronaval. Ulysse Nardin demonstrates how the lines on the Blast case are visually similar to those on the B-2 Stealth Bomber plane, and explains how the complex curves and finishes were only made possible through sophisticated forms of laser engraving. Case materials include titanium, ceramic, and 18k rose gold, including a mixture of those materials used for various parts of the case. Pricing also seems fair in a world where, outside of extreme innovation or complication, most luxury watch brands appreciate that tourbillon watches ought to be priced at $50,000 USD or under. Just a decade ago that number was closer to $100,000 for most new tourbillon-based watches. 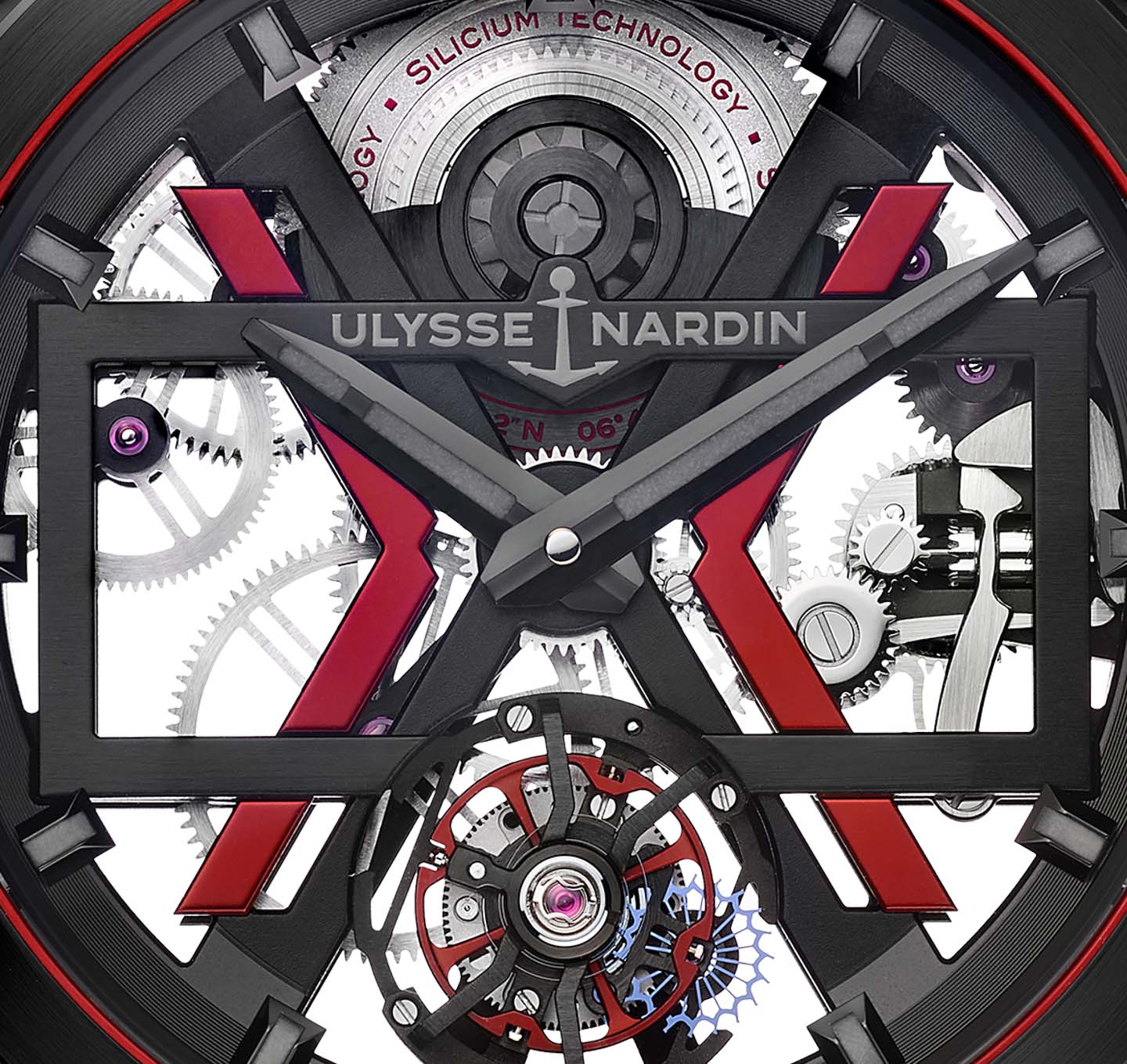 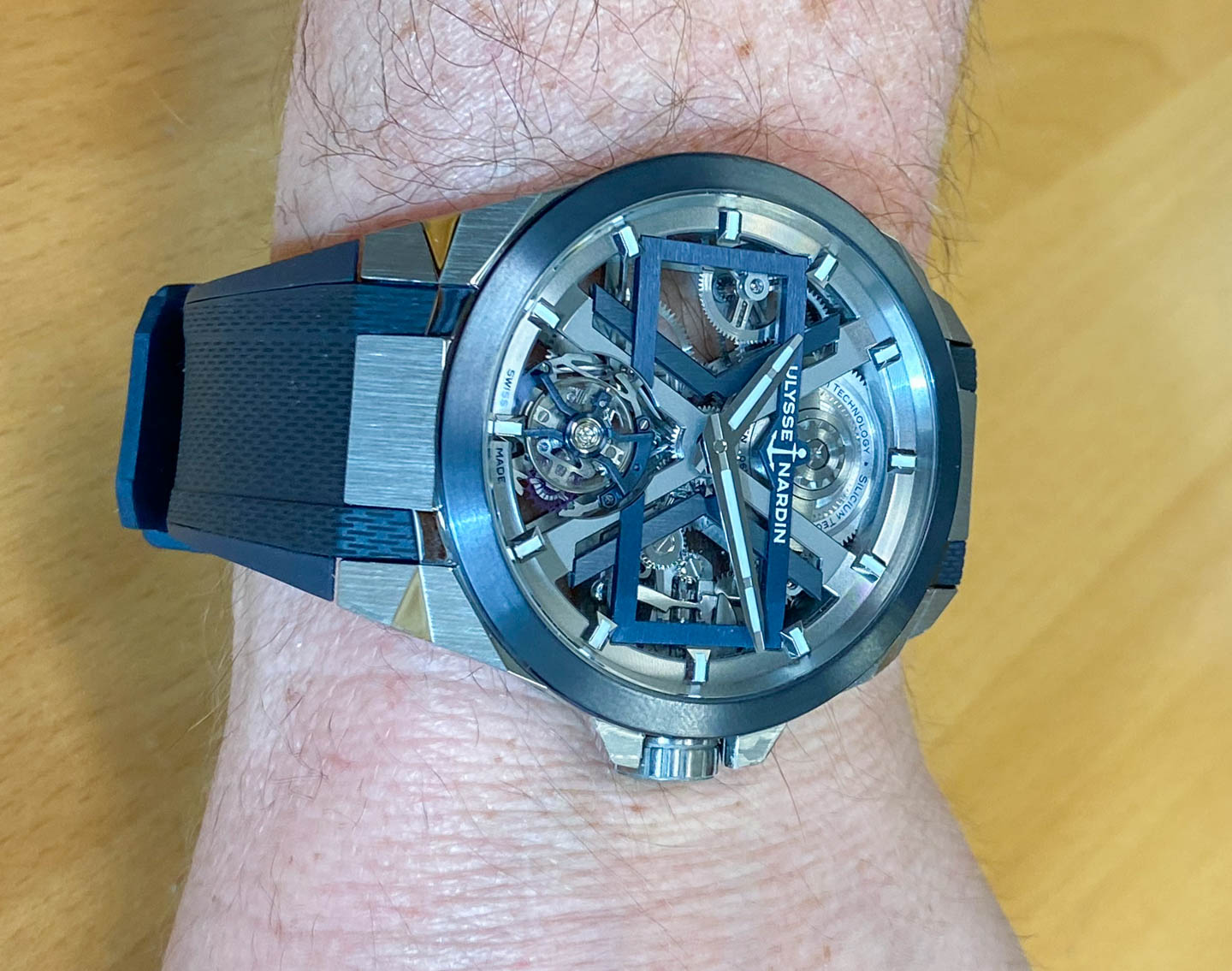